We gallop over the sandy beach to the Nahr Beirût, entranced by the landscape. The promontory of Beirût, crowned with its cream-coloured sandstone houses, palaces, churches, and mosques, its colleges and schools rising from the water's edge to the ridge of the cape, the pine-crowned ridges of Lower Lebanon to the east, form a picture only equalled by the Bay of Naples . . . . We now enter Beirût, the metropolis of modern Phœnicia, and its most beautiful and most enlightened city. Its situation is all that could be desired, on the northern slope of a promontory which runs west for three miles from the, Nahr Beirût to Râs Beirût . . . . Here where the changes of temperature through the successive months of the year are so gradual that autumn fades imperceptibly into winter, and winter itself is a genial spring, and spring warms into summer with hardly a change of half a degree a day, you have the perfection of climate, and do not wonder that the Greek poet should call it "the nurse of tranquil life." (Source: Picturesque Palestine, vol. 3, pp. 33-34.)

Beirût is the Berytus of the ancients, and was probably founded by the Phœnicians . . . . Strabo first mentions the city in 140 B.C., when it was destroyed by Tryphon during the reign of Demetrius Nicator. The Romans rebuilt it and colonised it with veterans of the fifth Macedonian and eighth Augustan legions. It was here that the two sons of Herod the Great were tried unheard and in their absence, and condemned to death by their cruel and unnatural father. The Elder Agrippa greatly favoured the city, and adorned it with a splendid theatre and amphitheatre, besides baths and porticoes, inaugurating them with games and spectacles of every kind, including shows of gladiators. Here, too, after the destruction of Jerusalem, Titus celebrated the birthday of his father, Vespasian, by similar exhibitions in which many of the captive Jews perished. In the middle of the third century a celebrated Roman law school was founded here. Students flocked to it from all countries, including Gregory Thaumaturgus and Apion, the martyr . . . .From 250 A.D. to 550 was the golden age of literature in Beirût, which reached its zenith in the reign of Justinian, who regarded the Beirût school with special favour. (Source: Picturesque Palestine, vol. 3, p. 34.) 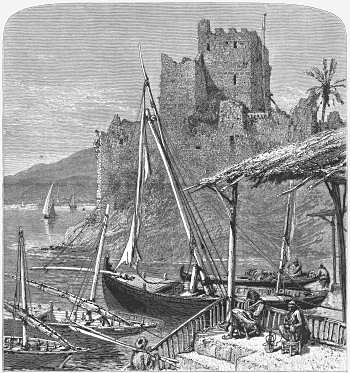 On the 9th of July, 551, this city was destroyed by an earthquake, and its learned men went for a season to Sidon. In the seventh century Khaled, "the Sword of Mohammed," swept over the land. Beirût fell into Muslim hands, and its decline was rapid and complete. In 1110 Baldwin I., with the Crusading army, captured Beirût, and they long held it as a religious and military centre, the Maronites of Lebanon acting as a friendly barrier to the Muslim hordes of the east. Saladin occupied it for a short period, but the Christians were not permanently displaced until after the battle of Hattîn, in 1187. From that time until the days of the famous Druse prince, Fakhr ed Dîn, it continued in obscurity. This energetic man rebuilt the city and planted new pine groves. In 1840 the English fleet bombarded the city to expel the Egyptian army of Ibrahim Pasha. In August, 1860, it was occupied by six thousand French troops, sent by Napoleon III., with the consent of the European powers, to check the tide of massacre and civil war which had overwhelmed the land. (Source: Picturesque Palestine, vol. 3, pp. 34-35.)

American University of Beirut from Sea 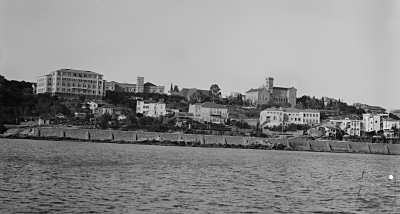 This favourite city of Justinian has become again the literary centre and pride of Syria. Here are gathered its colleges and seminaries, and its chief hospitals and churches, journals and printing presses. The American Mission, founded in 1820, preceded all other agencies in the work of education. Thousands of youths have been taught, and there are now under its care one hundred and four schools, with more than four thousand pupils, a college and medical institution, three female seminaries, and eight high schools. It has seen Beirût rise from a town of eight thousand to a city of eighty thousand . . . .The native sects most hostile to education are falling under the influence of educated young men and women, and Mohammedans, Greeks, Maronites, Papal Greeks, and Jews have established schools of their own. Other foreign societies, as the British Syrian Schools, the Prussian Deaconesses of Kaiserswerth, and the Established Church of Scotland, have opened schools for girls and boys, until there are to-day in Beirût three thousand five hundred children in Protestant schools, and seven thousand in the schools of the native societies. (Source: Picturesque Palestine, vol. 3, p. 35.) 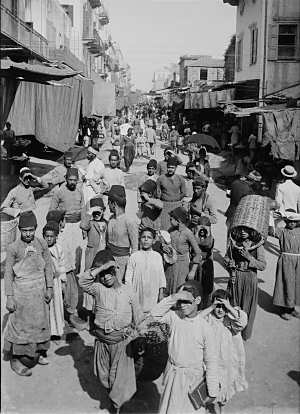 In passing through the crowded streets and bazaars of this semi-European and semi-Oriental town it is both interesting and amusing to notice the number and variety of the street cries from the bread-sellers, the candy-sellers and the carriers of water, whose occupation is one of slavish toil, sometimes carrying as they do a water bottle made out of the whole skin of an ox. The shrill cries of warning uttered, now in front, now behind, now on this side, now on that, all combine to make a Babel of discordant sounds; and yet, what a perfect paradise for the artist, the relic-hunter or the antiquarian! The bread-seller cries "Ya karim! Ya karim!" which is not the name for the bread, but which implies "Gift of the bountiful one." The water-carrier, jingling his copper saucer to attract attention, cries "Ishrub ya 'atshan! Ishrub ya 'atshan!" the meaning of which is "Drink, O thirsty." (Source: Earthly Footsteps of the Man of Galilee, p. 313.)