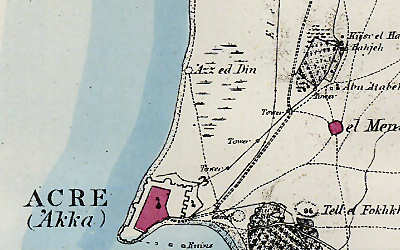 Acre has had, during its long history, as many names as it has had sieges, and captures, and masters. It was Accho under the primeval Canaanites; it was Ptolemais under the Greeks; it was St. Jean under the Crusaders; and now it is Akka under the Turks. But this modern name is simply the Arab form of the Hebrew Acco. This old city has been more closely connected with medieval and modern European history than any other in Syria or Palestine. Napoleon called it the key of Palestine; and during the last seven hundred years it has proved to be so. Its site, like that of its sister Tyre, is peculiar. Tyre was an island city; Acre is almost a fortress in the sea. It stands on a triangular tongue of land, projecting from a low plain into the Mediterranean; and it is defended on the land side by a broad and deep moat stretching across the land from shore to shore, and capable of being filled from the sea. (Source: Galilee and the Jordan, pp. 235-236.)

Acre, and the Mosque of Jezzar Pasha 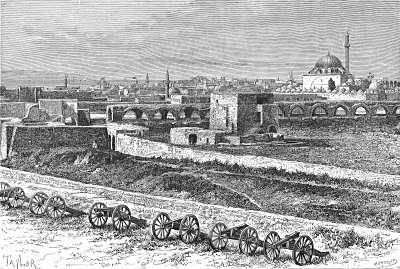 It need hardly be said that no ancient buildings are left standing in ’Akka; the most important of the modern structures owe their origin to Ahmed Pasha, surnamed Jezzar (the Butcher), who died in 1804, and who has been compared to Herod for his cruelty, as well as for his delight in building. The great khân of Jezzar Pasha occupies the site of a Dominican convent; the galleries surrounding it are supported by ancient columns of red and grey granite, hence it is known as Khân el Amîd (Khân of the Columns). The great mosque of Jezzar Pasha, which has been restored again and again (the present buttressed dome having been erected since 1863), occupies the site of a cathedral. . . . It is an elaborate but not a beautiful structure. It stands, however, in the centre of a magnificent quadrangular court, planted with cypress and palm trees and flowering shrubs, which shelter some tombs of white marble. This court is surrounded by cloisters supported by ancient columns, and divided into apartments for the accommodation of the mosque attendants and pilgrims. (Source: Picturesque Palestine, vol. 3, pp. 86-87.) 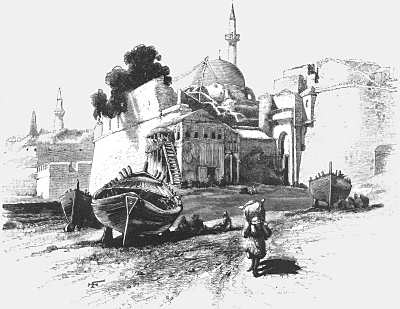 The only land entrance to ’Akka is at Burj Kepi (the Gate Tower), near the southern extremity of the short eastern land-wall, which meets the sea-wall nearly at right angles at the head of the harbour. . . . It will be seen that the place of entrance, within an arch of horseshoe form, is on the south side of the tower, and after passing through it, it is necessary to turn to the left, that is westward, to enter the city. This is characteristic of entrances to walled towns in the East, they being very rarely direct. . . . Towards the gate of ’Akka many roads converge; . . . . every day, early in the morning, troops of donkeys and peasants arrive from the neighbouring gardens and villages with fruit and vegetables, eggs and milk, while fishermen land their spoils from the sea . . . . Al Hariri (1052—1123), the most famous Arabic poet of the Muhammedan era  . . . wrote . . . words in praise of a seaport town which are perfectly applicable to ’Akka:—“This is the pleasant place of meeting, the meeting-place of the ship and the camel, where lizards may watch the leaping sea-fish, where the camel-driver communes with the sailor, and the fisherman astonishes the tiller of the soil with stories of the sea.” (Source: Picturesque Palestine, vol. 3, pp. 81, 83.)

Acco from the Bay 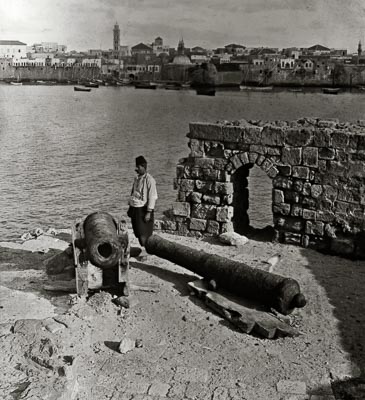 The harbour is formed by the curve of the narrowing reef on which the city is built towards the south-west, corresponding with the curve of the opposite shore to the south-east. There are the remains of an ancient mole, visible under water, running eastwards from the south-east point of the reef, but within this line the average depth of the harbour is now only three feet. This partly arises from recent silting, but chiefly from having been purposely filled up early in the seventeenth century by the renowned rebel Druse chieftain, the Emir Fakr-ed-Dîn, who held supreme sway over Syria and Palestine from the year 1595 to 1634. . . . The port of ’Akka extends one thousand feet from north to south, and seven hundred feet from east to west, but it affords no protection in stormy weather, and ships then seek refuge at the opposite side of the bay in the sheltered haven of Haifa . . . which is formed by a deep curve of the shore at the foot of the headland of Carmel . . . .  (Source: Picturesque Palestine, vol. 3, pp. 76-78.)