Woman at the Well, John 4

Source: Earthly Footsteps of the Man of Galilee, p. 163

Going northward to Judea of Galilee Jesus "must needs go through Samaria." On this journey He came to Sychar, near to the parcel of ground that Jacob gave to his son, Joseph, where Jacob's Well is still found. Here we are upon undisputed ground. According to Dean Stanley it is, perhaps, the only place the identity of which is beyond all question. On the 3rd of May, 1894, the artist and one of the editors reached this place about three o'clock in the afternoon . . . . Here the conversation took place between Jesus and the woman of Samaria. We could look to Mount Gerizim on our left and remember the temple to which the woman pointed when she said: "Our fathers worshipped in this mountain." . . . The well is now seventy-five feet deep and seven feet six inches in breadth. The diameter of the opening is seventeen and a half feet. A ruined vault stands above the well twenty feet long, ten feet broad and six feet high. The pieces of broken marble you see in the front belong to some ancient church. It was here by this lonely well that Jesus told to a woman and to all the world the story of the true relationship between God and man. (Source: Earthly Footsteps of the Man of Galilee, p. 163.) 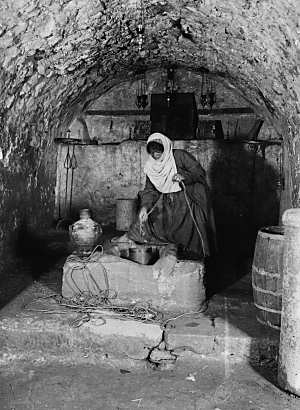 And he had to pass through Samaria. So he came to a town of Samaria called Sychar, near the field that Jacob had given to his son Joseph. Jacob's well was there; so Jesus, wearied as he was from his journey, was sitting beside the well. It was about the sixth hour. There came a woman of Samaria to draw water. Jesus said to her, "Give me a drink." (For his disciples had gone away into the city to buy food.) The Samaritan woman said to him, "How is it that you, a Jew, ask for a drink from me, a woman of Samaria?" (For Jews have no dealings with Samaritans.) Jesus answered her, "If you knew the gift of God, and who it is that is saying to you, 'Give me a drink,' you would have asked him, and he would have given you living water." The woman said to him, "Sir, you have nothing to draw water with, and the well is deep. Where do you get that living water? (John 4:1-11; ESV)

The woman said to him, "Sir, I perceive that you are a prophet. Our fathers worshiped on this mountain, but you say that in Jerusalem is the place where people ought to worship." Jesus said to her, "Woman, believe me, the hour is coming when neither on this mountain nor in Jerusalem will you worship the Father. You worship what you do not know; we worship what we know, for salvation is from the Jews. But the hour is coming, and is now here, when the true worshipers will worship the Father in spirit and truth, for the Father is seeking such people to worship him. God is spirit, and those who worship him must worship in spirit and truth." The woman said to him, "I know that Messiah is coming (he who is called Christ). When he comes, he will tell us all things." Jesus said to her, "I who speak to you am he." (John 4:19-26; ESV).

Meanwhile the disciples were urging him, saying, "Rabbi, eat." But he said to them, "I have food to eat that you do not know about." So the disciples said to one another, "Has anyone brought him something to eat?" Jesus said to them, "My food is to do the will of him who sent me and to accomplish his work. Do you not say, 'There are yet four months, then comes the harvest'? Look, I tell you, lift up your eyes, and see that the fields are white for harvest. Already the one who reaps is receiving wages and gathering fruit for eternal life, so that sower and reaper may rejoice together. For here the saying holds true, 'One sows and another reaps.' I sent you to reap that for which you did not labor. Others have labored, and you have entered into their labor." (John 4:31-38; ESV).