Dome of the Rock, Interior 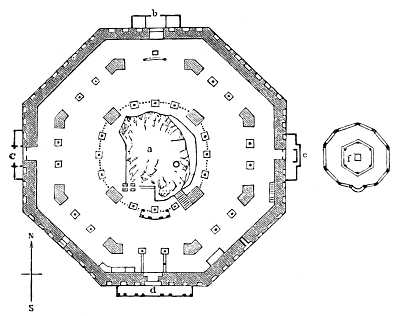 Plan of the Dome of the Rock

The plan of the interior is peculiar, and, so far as I know, unique. There are two concentric rings of columns and piers supporting the roof, leaving corridors, or aisles, between; the outer thirteen feet wide, the inner thirty. The columns are marble, but not of uniform size, and were evidently rifled from other buildings, as is almost invariably the case in the old mosques of Syria. It is lighted by fifty-six pointed windows, filled with stained glass of extraordinary brilliancy and beauty. Directly under the dome is the shrine of the mosque and of the entire Haram. It is a bare rock, the natural crown of Moriah, about sixty feet across, and rising some six feet above the floor. It gives its name to the building-Kubbet es-Sukhrah, "The Dome of the Rock." . . . The sacred rock itself is specially deserving of notice. On its south-east side a flight of steps leads down to an excavated chamber, or cave, about six feet high. Here the guardian took me to several small altars and niches, which, he said, were dedicated respectively to Abraham, David, Solomon, Elias, and Gabriel. (Source: Jerusalem, Bethany, and Bethlehem, pp. 47-48.)

Interior of the Dome of the Rock 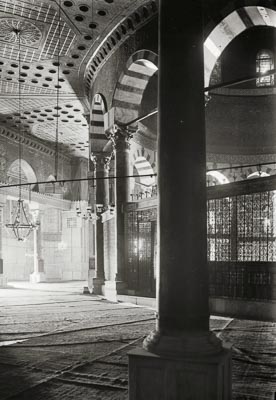 Internally it is one hundred and fifty-two feet in diameter. The great rock, the "Sakhra," which is in the centre, is encircled by four massive piers and twelve columns; three columns being placed between each pair of piers. They are united by arches and support the beautifully proportioned dome, which is sixty-six feet in diameter at its base. An octagonal screen, composed of eight piers and sixteen columns, divides the remaining space into two encircling aisles; the outer aisle being thirteen and the inner one thirty feet wide . . . . The aisle screen is perhaps the most interesting part of the building . . . . The bases of the columns are cased with slabs of marble . . . . The shafts of the columns do not rest immediately on their bases, but on sheets of lead from three-quarters of an inch to one and a half inches thick. The capitals are of the Corinthian order . . . . The bases and columns of the inner circle are similar to those of the octagonal screen . . . . The columns and piers are connected by a fine wrought-iron screen, which is said to be of French workmanship of the latter part of the twelfth century, and believed to be a relic of the Crusaders . . . . The dome of the building is of wood, covered externally with lead, and internally with stucco, richly gilt and painted; its height is about ninety-six feet. (Source: Picturesque Palestine, vol. 1, pp. 54, 55, 58, 60.) 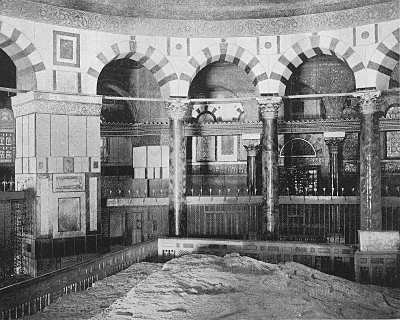 Source: Earthly Footsteps of the Man of Galilee, p. 234.

The Rock in the Temple

We present to our readers a rare view furnished also by our American consul at Jerusalem. We see as perfect a photograph as can be secured of the rock itself over which the dome of Omar rises. The inside of the mosque is so dark that it requires the light a long time to place the image of the object before the camera upon the plate. The impression from which this picture is printed required three or four hours. Such a picture we could not have possibly secured, for when we were in the holy city the mosque of Omar was filled with visitors nearly all the time.  . . . It is believed by some scholars that the subterranean passages branching out from the cave beneath the rock were the outlets for the blood of the sacrifices here offered. There is no proof that this was the cave leading to the canal that connected the Fountain of the Virgin below the rock Ophel with the Pool of Siloam. The cave which the visitor may enter is a natural one, and evidently has not been enlarged. In the center of it is a marble slab that covers the mouth of the well. (Source: Earthly Footsteps of the Man of Galilee, p. 234.)

The Cave Under the Great Rock on Mount Moriah 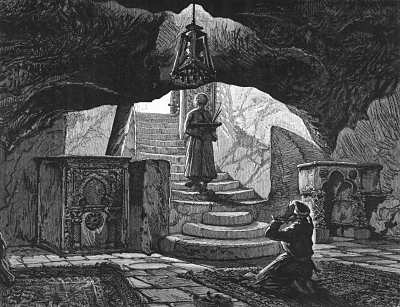 The "Sakhra" Rock, which occupies the centre of the building, is overhung by a canopy and surrounded by a rude wooden railing. It rises four feet nine and a half inches above the marble pavement of the mosque at its highest point, and one foot at its lowest; from north to south it measures fifty-six feet, and from east to west forty-two feet. Beneath the rock there is a small cave . . . the entrance to which is at the south-east corner of the rock; a flight of steps passes under an archway and leads down to the chamber. The average height of the cave is six feet. In the roof is a circular opening which pierces the rock; the floor is paved with marble, and the sides are covered with plaster and whitewash. The floor, when stamped upon, gives out a hollow sound, indicating the presence of a lower chamber, possibly a well, the "Well of Spirits." The sides, too, when tapped give forth a hollow sound, which the Moslem guardian brings forward as a proof that the Sakhra is, in accordance with the legend, suspended in the air. (Source: Picturesque Palestine, vol. 1, pp. 61-62.)

At BiblePlaces, see Dome of the Rock