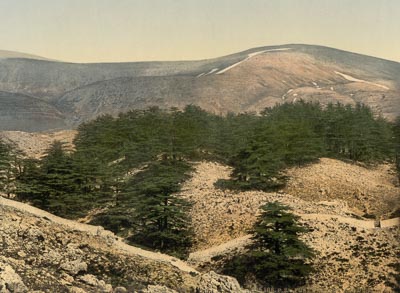 After two and a half hours' ride over the undulating moraines which extend east of Ehden, and form the curved shelf around the base of the encircling amphitheatre of giant mountains, we descry on our right, far down in the east end of the Kadîsha gorge, the large crowded village of Bsherreh, with its churches and convents, its water and trees, and east of it the roaring cataract which leaps down the rocks from the fountain of the sacred river. Still higher up, standing solitary and alone, is the dark compact cluster of trees known as the Cedars of Lebanon . . . (Source: Picturesque Palestine, vol. 3, p. 24.)

Cedars of Lebanon, Near Tripoli 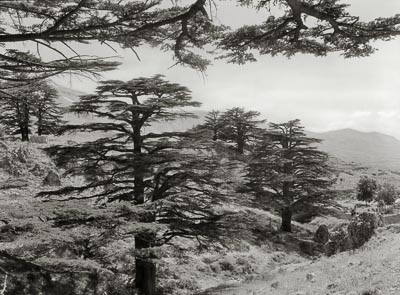 We hasten our pace . . . to the sacred grove called "Arz er Rub," that is, "The Cedars of the Lord." There are three hundred and ninety-three trees, some ten or twelve of which are of giant girth, though the loftiest is not more than eighty feet in height. The twelve largest trees are called by the fellahîn "The Twelve Apostles," and they have a curious tradition that our Lord and His apostles came to this spot and left their walking staves standing in the soil, which sprouted into cedar-trees. A Maronite chapel stands in the grove, and the patriarch claims the sole right to the sacred trees. The clergy have cultivated the superstition that those cutting the trees for fuel will be smitten with disease or calamity by the guardian divinity of the grove . . . . H.E. Rustem Pasha, Governor-General of the Lebanon, has surrounded this grove with a well-built stone wall with two strong gates, and appointed guardians to prevent the ravages of the goats on the young trees, and to compel travellers to pitch their tents outside the enclosure. (Source: Picturesque Palestine, vol. 3, pp. 24, 25.)

In the Grove of Cedars, Lebanon

The range of Lebanon for a hundred miles along the Jird was doubtless once covered with cedar forests. We have visited eleven distinct groves of cedars in Lebanon:-1. The ancient "Cedars of the Lord" above Bsherreh, three hundred and ninety-three in number . . . . 2. The grove at the fountain of Ehden, fifty trees. 3. The great grove between El Hadeth and Nîha, numbering tens of thousands of trees, covers an area of nearly twelve miles. 4. A smaller grove farther south on the summit and brink of the precipice. 5. The scattered trees above Duma. 6. The Ain Zehalteh grove of ten thousand trees, cut down by Murad Akîl, and now growing up again. 7. A small grove on the cliff overhanging El Medûk. 8. A small cluster near Kŭl'at el Bizzeh. 9. The fine grove of Mâsir el Fukhkhar, about three hundred trees, some of great size. 10. The forest of Jird el Barûk, thousands of trees. 11. The eastern grove of Barûk, about two hundred trees. (Source: Picturesque Palestine, vol. 3, pp. 25-26.) 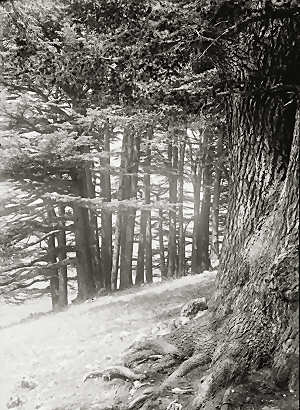 The first historical notice of the cedars of Lebanon is in the reign of David, when this monarch built himself a palace of cedar-wood (2 Samuel v. 11). Solomon caused cedars to be brought from Lebanon for the building of the Temple, and they were floated down the coast from Jebeil to Jaffa, after being cut by the "four score thousand hewers in the mountains." In 536 B.C. Zerubbabel hired the Phoenicians of Tyre and Sidon "to bring cedar-trees from Lebanon to the Sea of Joppa." . . . Tiglath Pileser . . . visited the Lebanon for the purpose of obtaining cedar-wood to adorn the temples and palaces of Kileh Shergat. The groves of Lebanon have thus been despoiled for three thousand years by the kings of the adjacent countries, until the upper ranges are quite denuded, and the voracity of the flocks of goats in nipping the tender shoots, and the rapacity of the fellahîn, are preventing the growth of new forests from the seed. Were it not for the energetic action of the Lebanon Government the whole mountain would soon be stripped of its forest glory. (Source: Picturesque Palestine, vol. 3, p. 26.)

At BiblePlaces, see Cedar of Lebanon