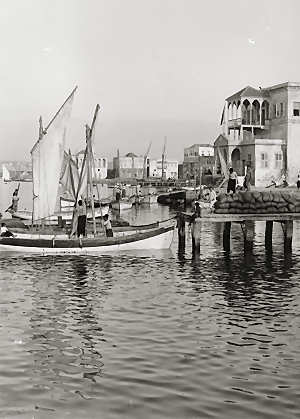 Tripoli was probably founded about 700 B.C., but it has no continuous history. The Seleucidan prince, Demetrius I., erected a palace here, which was succeeded by splendid edifices erected by the Romans, but owing to frequent and destructive earthquakes few traces of the ancient city remain. The Muslims occupied the town at the time of the Islamic invasion, but the Crusaders failed to capture it until five years after their arrival at Antioch in 1104. When the Christian army finally took the city, a valuable library of one hundred thousand volumes was destroyed . . . . In 1289, when the city was destroyed by the Sultan Kilawûn, it was said to have contained four thousand looms for the weaving of silk, and the zinnâr Tarâbulusy, or Tripoli silk girdle, is famous even to the present day. The Arabs call the city Tarâbulus, the Arabic form of Tripoli. The Turks usually speak of it as "Kochuk Sham" (Little Damascus), and it is well worthy of the name. (Source: Picturesque Palestine, vol. 3, pp. 13-14.)

Tripoli and el Mina from Castle

It stands on the eastern extremity of the triangular plain, a mile wide, at the base of the elevated plateau called El Kûra, from one hundred to three hundred feet high, which reaches to the foot of the Lebanon range . . .  . The roaring Kadîsha, called by the Muslims Abû Ali, runs through the city, crossed by two stone bridges, besides the new bridge of a tramway farther down the stream. On the right bank, the houses on the hill are chiefly rough structures of the Maronite fellahîn; those below, between the river and the Bab Tibbaneh, being Muslim. The Christian quarter is on the left side of the river, and stretching far to the southern Blacksmith's Gate is the populous Muslim quarter. The population consists of twelve thousand Muslims, four thousand Greek Christians, five hundred Maronites, and a few Protestants, Papal Greeks, and Jews. These sects live in distinct quarters, and the different trades of the city, as in Damascus, occupy separate streets. (Source: Picturesque Palestine, vol. 3, p. 14.) 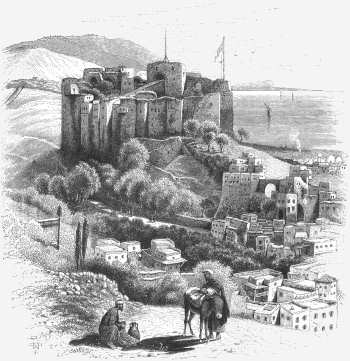 The Castle of Tripoli, A Stronghold of the Crusaders

Among the objects of interest is the well-preserved castle of Raymond of Toulouse, recently transformed by Midhat Pasha into an imperial penitentiary . . . . It was either built or greatly enlarged by Raymond, and was a stronghold of the Crusaders for one hundred and eighty years during the twelfth and thirteenth centuries. Before its conversion into a prison, access could be obtained to the charming view from the top of its walls. On the east you look down into the river gorge, with its roaring waters, the Mullawîyeh Convent, and the orange groves, with snowy Lebanon in the background piercing the clouds  . . . . On the west, the verdant plain, the blue sea in the distance, its shore broken by the Mîna, or marine city, and the five old towers along the northern beach, while the snow-white roofs, walls, domes, and minarets of the city form the foreground at your feet. From a residence of several years in Tripoli, I can testify to the ever-changing beauty of its scenery, the lusciousness of its fruits, as well as the courtesy and hospitality of the better portion of its people. (Source: Picturesque Palestine, vol. 3, pp. 15-16.)

Convent of the Mullawiyeh, or Dancing Dervishes, Tripoli 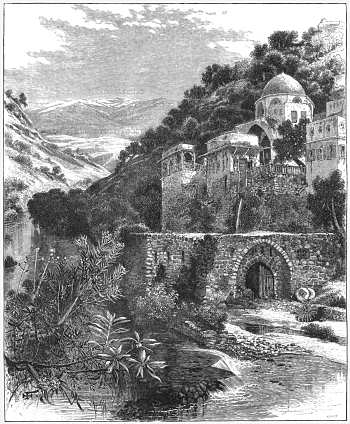 Passing beyond the castle, and descending rapidly into the gorge of the river, you walk for a few minutes among trees and flowers and murmuring waters to the convent of the Mullawîyeh dervishes, who perform their sacred dances every Friday afternoon, at certain seasons of the year. I have seen it crowded with men below and women above behind the latticed screen, when eight or ten of the dervishes whirled in the literally giddy mazes of the dance for two hours, until the performers fell on the floor exhausted, and the audience retired. This charming spot is a favourite resort of the Tripolitans, and in the month of April, when the orange and lemon groves below and around are in full bloom, and the air filled with the delicious fragrance, this quiet retreat is a place one never wearies of visiting . . . (Source: Picturesque Palestine, vol. 3, pp. 16-18.)

Between the mouth of the Kadîsha, on the northern shore, and El Mîna, are several fine towers of cut stone, standing like sentinels along the shore. They are called Burj Ras en Neb'a, Burj es Seb'a (Lion's Tower), Burj et Takîyeh (Traveller's Rest), Burj el Mugharibeh (Algerines), and Burj esh Sheikh Affân. These are evidently mediæval structures, and were built on foundations made up of ancient granite columns and fragments of Greek and Roman edifices. They are now being rapidly razed, to supply stone for more modern structures. El Mîna . . . has a population of seven thousand, chiefly Greek fishermen and sponge-divers, who obtain an ample livelihood from their laborious and perilous profession, the sponge crop amounting to £ 20,000 a year. The steel-tracked tramway from Tripoli passes down the broad level road between the gardens to the Mîna gate, and thence to the seashore. (Source: Picturesque Palestine, vol. 3, p. 18.)