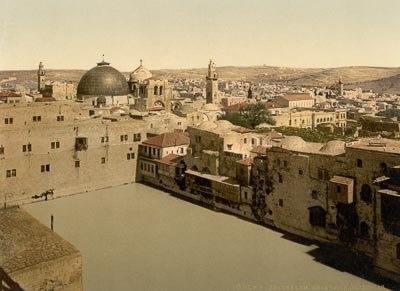 Passing along this last street, we have, at first, on the left the large reservoir known as Hezekiah's Pool, and on the right the Greek Church and Monastery of St. John the Baptist. Hezekiah's Pool, or, as it is called by the people, "The Pool of the Patriarch's Bath," is an open tank surrounded by houses, which is supplied with water by an aqueduct from a reservoir outside the city. It is capable of containing about three million gallons of water, but is in very bad repair. The bottom of the pool is covered by a thick deposit of vegetable mould, and one corner is nothing more than an open cesspit of the foulest description; the water, nominally, is only used for washing purposes, but the poorer classes often draw it for drinking during summer, and hence arises much fever and sickness. (Source: Picturesque Palestine, vol. 1, p. 12-14.)

Jerusalem from the Pool of Hezekiah 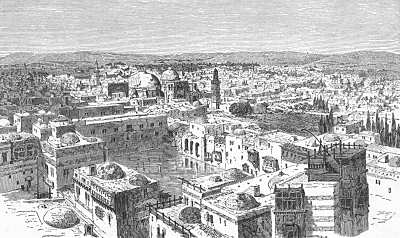 The Pool of Hezekiah . . . receives its principal supply of water from the Birket Mamilla without the walls, and it is calculated to hold about four million gallons. The masonry does not appear to be very old, and but a small portion of the pool has been formed by actual excavation. The cement is bad and out of repair, and the bottom is covered with a thick deposit of vegetable mould, the accumulation of several years. When the pool is full in winter no inconvenience arises, but in autumn, when the water gets low, exhalations rise up which have a bad effect on the health of those who live in the neighbourhood. The water is chiefly used in the Turkish "Bath of the Patriarch," whence the pool derives its local name, "Pool of the Patriarch's Bath;" the Christian name, "Pool of Hezekiah," comes from the tradition that it was made by that king, as in 2 Kings xx. 20: "Hezekiah made a pool and a conduit and brought water into the city." There is perhaps, better reason for identifying the pool with that called by Josephus Amygdalon, where the celebrated tenth legion raised a bank against the city walls during the siege by Titus. (Source: Picturesque Palestine, vol. 1, pp. 109.) 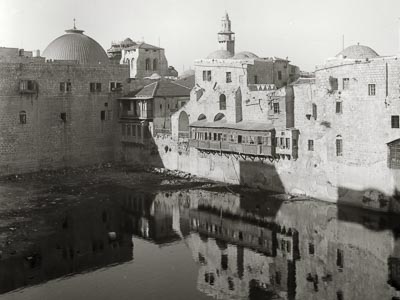 Within the heart of the city is a large pool on the west side of Christian street. It is called the Pool of Hezekiah . . . . The pool is two hundred and forty feet long by one hundred and forty feet wide. The bottom is of the natural rock, leveled and laid in cement. It is supplied with water through a small aqueduct from Berkit Mamilla . . . . Dr. Thomson says: . . . "The present pool is a remarkable work, in good preservation and in constant use." (Source: Earthly Footsteps of the Man of Galilee, p. 237.)

See Water Systems in Jerusalem, the Pool of Siloam, the Pools of Solomon, or Water in Egypt

At BiblePlaces, see Warren's Shaft, The Pool of Siloam, or Hezekiah's Tunnel