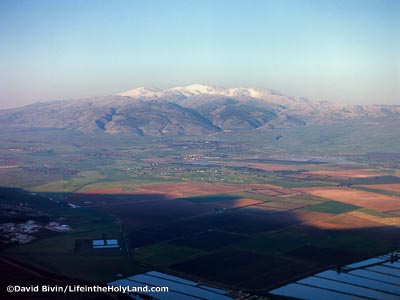 Huleh Valley with Mount Hermon from the Southwest

This image looks northeast across the Huleh Valley towards Mount Hermon from the ridge high above and a little south of Kiryat Shmonah. The various settlements and commercial fish ponds are visible in the valley. Little more than a century ago, the region was much less tamed: "The greatest length of the valley is not far from sixteen miles, with an average breadth of six miles. The lake proper is four miles long and as many wide, but in addition six or more miles to the north are occupied by reeds, among which the streams not only wind, but form here and there miniature lakes, adding variety to the surface, which otherwise would be an unbroken mass of green. Into this dense jungle of canes and papyrus it is impossible to penetrate." (Source: Picturesque Palestine, vol. 2, p. 108.) 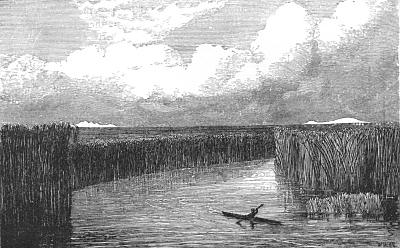 Of Lake Hûleh little was known until it was explored by Mr. Macgregor in his canoe voyage on the Jordan. It is a triangular sheet of water, about four and a half miles in length by three and a half in its greatest breadth, surrounded by an impenetrable morass covered with tall canes and papyrus reeds, through which, as the Arabs declare, it is impossible even for a wild boar to make its way. It could not be surveyed from the shore, and until Mr. Macgregor’s adventurous expedition no boat had ever floated on its waters. The additions which he has made to our knowledge of the hydrography of the district are of the highest value; and his vigorous narrative of the difficulties he surmounted, and the perils he escaped amongst the wild Bedouins of the district is familiar to all our readers. (Source: Those Holy Fields, pp. 210-13.) 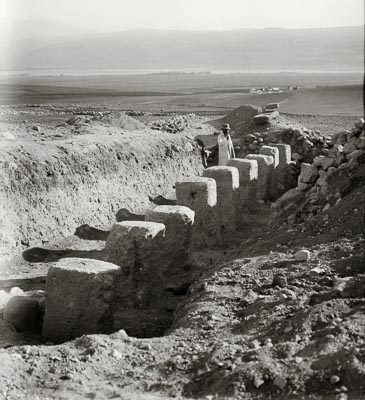 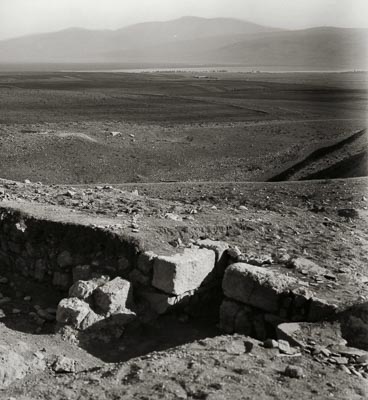 It was in this hot, seething, pestilential, but fertile plain that Joshua, after the subjugation of Central and Southern Palestine, fought his third and last great battle with the hosts of Canaan. Jabin, king of Hazor, rallied round him all the chiefs who had not yet yielded. They came from ‘the plains south of Chinneroth,’ the Jordan valley south of the Sea of Galilee, the Jebusite from the fortress of Jerusalem, the Hittite and the Amorite from the far south, to ‘the Hivite under Hermon,’ in the north. ‘And they went out, they and all their hosts with them, much people, even as the sand that is upon the sea shore in multitude, with horses and chariots very many. And when all these kings were met together, they came and pitched together at the Waters of Merom to fight against Israel.’ It was doubtless the multitude of their horses and chariots, a force not possessed by Israel, which induced them to select this great plain as their battle-field. Suddenly Joshua and his men fell upon them from the heights above, and the Lord delivered them into the hands of Israel, who smote them and chased them far to the west, across the hills and valleys of Galilee, where their horses and chariots could only encumber them . . . . (Source: Those Holy Fields, p. 213.)