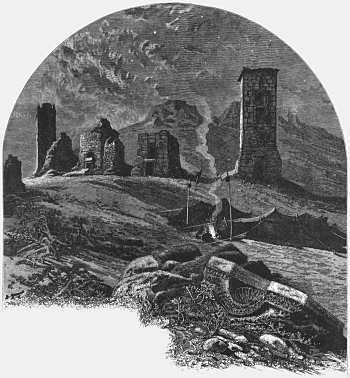 We now turn our attention to what constitute one of the most interesting and striking features in the ruins of Palmyra—the mausoleums, or tower sepulchres. One of the most beautiful towers [the one on the right in the illustration] stands in the glen, or Wâdy el Kûbûr, near the road to Kuryetein. It is a square tower, thirty feet on each side, and about eighty feet high, divided into four stories, and slightly tapering . . . . The door is ornamented with pediment and moulding, and half-way up is a bilingual inscription on a slab, above which is a bracket with two winged figures, and surmounted by a canopy . . . . This building is a fair specimen of the mausoleums of Palmyra, of which more than one hundred can be seen along the mountain slopes and on the plains, a few of them entire, but the greater part in ruins. The inscriptions on them are generally in the Palmyrene character only, though not a few are bilingual, having a Greek translation appended. On the tower above described is a Greco-Palmyrene inscription stating that it was built as a family tomb by Elabelos in the Seleucian year 414 (A.D. 102) . . . . (Source: Picturesque Palestine, vol. 2, p. 198.) 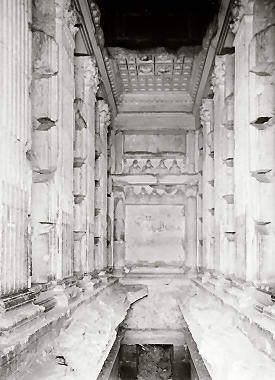 Entering the door we find ourselves in a chamber twenty-seven feet by ten, and twenty feet high. On each side are four fluted Corinthian pilasters, with tiers of loculi between them. Opposite the door is a recess containing five busts in relief, each having a short Palmyrene inscription, giving the name and parentage of the person represented. Over the cornice of the recess is a projecting slab, above which are four other busts with inscriptions. The interior of the doorway is ornamented with pilasters, and has a large bust over it. To the left of the door is a narrow staircase leading to the upper stories, and above the door to the staircase are five busts in two rows. The ceiling is beautiful, consisting of heavy slabs of stone, panelled and painted. Each of the central lacunars has a bust on a blue ground, and each of the outer ones a white flower in relief. The colours are fresh as those in the subterranean tombs of the Sidon Necropolis, but the busts are mutilated, as they are wherever Muslim iconoclasm has sway. (Source: Picturesque Palestine, vol. 2, p. 198.) 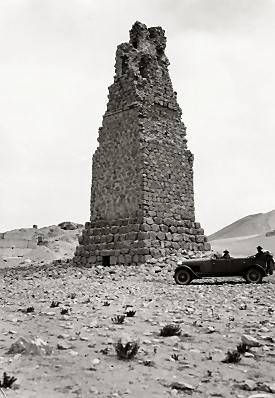 Highest of the Tower Tombs

The mode of burial would seem to have been to embalm the body, place it in one of the loculi, and seal up the opening. Wood found in one of the tombs a mummy in all respects similar to those in the land of the Pharaohs, and fragments of mummy linen and winding-sheets soaked in tar have been discovered here recently, like those in the tombs of Egypt . . . . The hill to the south-west of the city is called Tell es Sitt Balkis (“Hill of the Lady Balkis, Queen of Sheba”), the only name in Palmyra which connects it with the age of Solomon. The Arabs claim that the Queen of Sheba was named Balkis, a descendant of Yarab Ibn Kahtan of Yamen, and that Solomon married her. This would account for their naming a hill in Palmyra “Tell Balkis,” had Solomon actually built or reconstructed Palmyra; but if Solomon had nothing to do with Palmyra, it would be difficult to explain the association of the Queen of Sheba’s name with a spot so remote from Jerusalem. (Source: Picturesque Palestine, vol. 2, pp. 198-200.)

South of the fountain is a large cemetery with about twenty tower sepulchres of great antiquity. In one of them are two life-sized statues, sadly mutilated, “with flowing robes and close jackets curiously and elaborately laced over the chest.” Near by are numerous subterranean tombs, whose arched roofs rise just enough above the surface of the ground to reveal their existence. A few are open, but the majority are buried beneath the débris of ages, and in all probability still undisturbed, with all their treasures of statuary and memorial tablets. One which was broken through a few years since is cruciform, with three tiers of loculi in each compartment. Several statuettes and other ornaments were discovered in it. (Source: Picturesque Palestine, vol. 2, p. 200.)