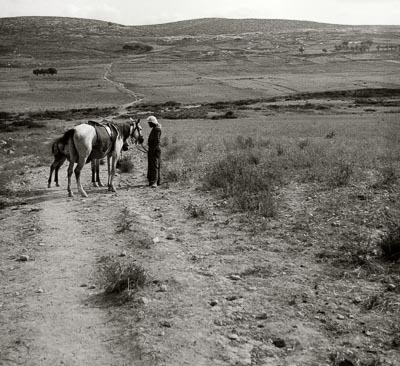 One of the most interesting incidents recorded in the early history of the Israelites in Palestine is the passage at arms between Goliath of Gath and the youthful David in the Valley of Elah. This valley, now recognised as Wâdy es Sŭr or Es Sunt . . . , commences in the mountains of Judah, near Hebron . . . , and descending rapidly towards the north, divides them from the hills of Philistia to the west. After about ten miles it bends round to the west, and is here crossed by the main road leading from Gaza to Jerusalem; that road by which the Egyptians of ancient times gained the hill country, and by which the Bedawîn of the present day make their forays upon the villages in the mountains. Hitherto it has been a somewhat broad valley, with parallel lines of hills on either side, but after passing Shocoh (Shuweikeh) on the left . . . it narrows considerably, and winds in and out through a somewhat narrow gorge for some miles until it enters the more open plain near Tell es Sâfy. (Source: Picturesque Palestine, vol. 3, pp. 157-58.)

Iron Age Wall at Socoh, the Camp of the Philistines 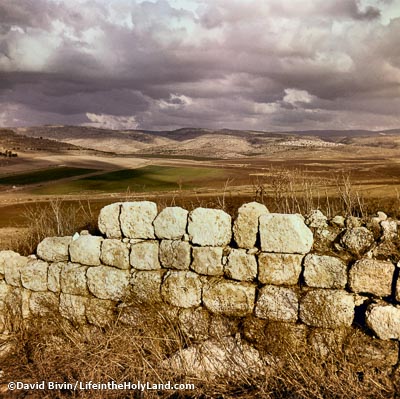 The bottom of this valley, near Shocoh, is a fine fertile plain, cultivated as corn-fields, and here it was that the encounter between David and Goliath took place, the Philistines standing on a mountain on one side, and Israel on a mountain on the other, with the valley between them. The people of Israel came down from the mountains and were to the north-east, while the Philistines concentrating from the plains were on the south-west, army against army in battle array. Gath, famous for its giants, had given to the Philistines a champion called Goliath, ten feet in height, clad in a coat of mail, with a helmet of brass, and the staff of his spear was like a weaver’s beam; and the spear’s head weighed six hundred shekels of iron. For forty days were these two armies face to face, and for forty days did Goliath call to the armies of Israel, “I defy the armies of Israel this day; give me a man, that we may fight together.” And all Israel were greatly afraid, for a champion who could cope with Goliath was unknown (I Samuel xvii.). (Source: Picturesque Palestine, vol. 3, p. 158.) 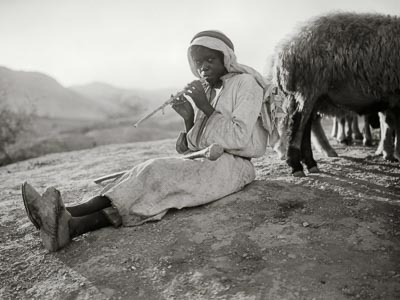 While the people of Israel were “dismayed and greatly afraid,” there arrived in camp the youthful David, who, when he had heard of the challenge of Goliath, asked what should be done for the man who killed the Philistine, and took away the reproach from Israel, and was told in reply that the king would enrich him and give him his daughter, and make his father’s house free in Israel. And David was brought before Saul and offered to fight with the Philistine. Now in this personal combat, thus contemplated, there was not only the danger to the life of David to be considered, but also to the whole people of Israel, for if the Philistine conquered they were to be servants to the Philistines. The consequences were, therefore, so momentous that Saul required a pledge as to David’s ability and prowess. David recounted his adventures with a lion and a bear, in each of which combats he was victorious, and Saul admitted his claim to act as champion, and bid him go against the Philistine. (Source: Picturesque Palestine, vol. 3, p. 158.) 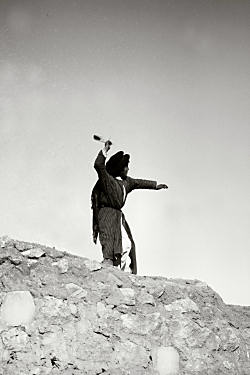 This circumstance shows clearly that the people of Israel were on the verge of a panic, on the point of giving in, otherwise they would not have so desperately adventured their safety to a comparatively unknown champion, to a youth totally unversed in the arts of war; but it also shows us something more—they permitted David to go to the encounter without armour, and knew that he was about to enter the lists trusting in the assistance of the God of Israel. It is clear from this that the people as a body still thoroughly believed in their God, and trusted to David as His instrument:— “And David put his hand in his bag, and took thence a stone, and slang it, and smote the Philistine in his forehead, and slew him. And when the Philistines saw their champion was dead, they fled; and the Israelites pursued them even to Gath and Ekron, and spoiled their tents.” At the present day the account of this victory of David can be read and studied on the spot, and all the incidents realised; for the ancient sites are still in existence, and the habits of the people are as in former days. It is not unusual at the present day to meet with shepherds so skilful with their slings that they can easily bring down birds at a distance of several yards. (Source: Picturesque Palestine, vol. 3, pp. 158-59.)

The royal city of Gath . . . is generally admitted to have stood on the conspicuous hill now called Tell es Sâfy, on which was built the important fortress of Blanchegarde by King Fulke during the Crusades . . . . It lies about sixteen miles from the seashore, and is situated on the extremity of one of the spurs of the hills of Philistia, as they melt down into the undulating plains. It obtained the name of Alba Specula during the Middle Ages on account of the glaring white chalk cliff or scarp which surrounds it, and which is most conspicuous for many miles to the south-west. It was a most important stronghold of the Philistines, and commanded the mouth of the Valley of Elah, from whence there went a main road to Jerusalem . . . . The hill on which the city stood is about two hundred feet above the surrounding plain, and is of an irregular shape . . . . It appears in a great measure to have been scarped all round, though the rubbish from the ruins has fallen over and covered up the old fortifications . . . .  (Source: Picturesque Palestine, vol. 3, pp. 159-61.)

See Psalm 23, David the Fugitive, Shepherds and Flocks or Bethlehem