The Flooding of the Nile River

A Silhouette on the Nile

The often repeated saying that, "Egypt is the gift of the Nile," is really true. But for the bounteous gifts bestowed by this river Nile what is now a garden of fertility would be a wilderness of rock or sand. The rains falling in the mountains among which the Nile has its sources, occasion the annual inundation, which begins about the end of June and reaches its highest point at the end of September. It then gradually subsides, and by the end of January the country begins again to dry up. By the inundation a thin coat of mud or slime not more than the twentieth of an inch in thickness is everywhere left after its subsidence. At its height the natives stay in their houses on the highest lands, travel on the dikes or swim across from point to point. (Source: Earthly Footsteps of the Man of Galilee, p. 44.)

Source: Earthly Footsteps of the Man of Galilee, p. 44

When it subsides the farmer makes haste to scatter his seed on the oozy, half-liquid mud. He literally "sows his bread upon the waters." Thus it requires neither plow nor harrow. Pigs and goats tread it into the land thus covered deep with Nile mud. The failure of the inundation brings great distress. Fearful droughts ensue. An excessive inundation causes such a flood as to sweep away the mounds of protection which are built here and there, drown cattle, imperil human life and spread desolation over the land. It is a case, in which the people have "too much of a good thing." The Nilometer is the measure by which the annual rise of the river is known. This Nilometer is situated at the southern extremity of the island of Rhoda opposite old Cairo. (Source: Earthly Footsteps of the Man of Galilee, p. 44.) 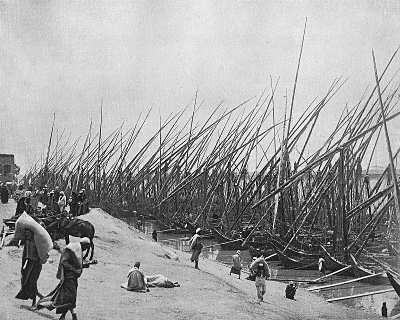 Source: Earthly Footsteps of the Man of Galilee, p. 47

Grain Boats on the Nile

"Agriculture is the foundation of Egyptian civilization." The fertility of the soil is literally exhaustless owing to the ever recurring miracle wrought by the inundation of the Nile. In consequence of this, abundant harvests are produced with the outlay of but little skill or cleverness on the part of the agriculturists. Next to wheat the harvest of maize is the most important of the Egyptian cereals. It is said that twenty-four millions of bushels of the two grains are produced annually. Rye, barley and rice are also raised in great quantities . . . . In Joseph's day Egypt was the great granary of the world, "and still" says Dr. Thomson, "when the crops fail through drought or other causes the people of southern Palestine go down to Egypt to buy corn." Genesis, xlii: 2. (Source: Earthly Footsteps of the Man of Galilee, p. 47.)

Nile River and Boat Near Luxor 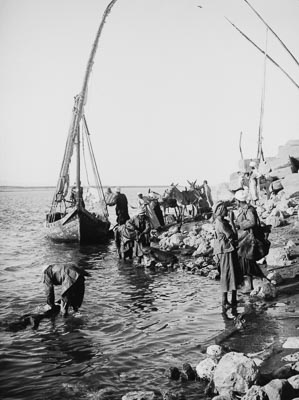 The Nile is not only the great fertilizer but also serves for the highway for the carrying of all kinds of grain to the market. It is difficult to find a word in the language meaning "travel." The terms the natives use signify "to go upstream" or to "go downstream." The boats used for carrying freight are built with a narrow keel, the stern and prow, as in ancient time, rising high above the water. They are usually managed by three or four men and carry what is known as the lateen sail. This is a large triangular sail much used in the Mediterranean. The upper edge is fastened to the lateen yard, a spar of considerable length, which is held at an angle of about forty-five degrees with the deck by means of a mast crossing it a third of a way up. (Source: Earthly Footsteps of the Man of Galilee, p. 47.)