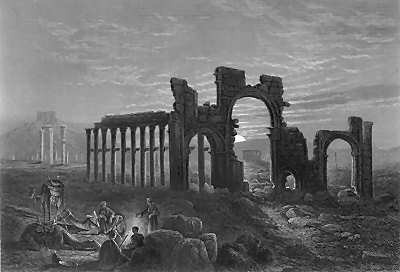 The most striking object in Palmyra, as you look down from the Saracenic castle on the north-western mountain, is the Grand Colonnade. This is the wonder of travellers and the artist’s delight . . . . When entire, with its one thousand five hundred white columns standing, its elegant entablature fading away in airy perspective for a distance of four thousand feet, with its central and side avenues, its intersecting colonnades and porticoes, and its triumphal arch flanked on both sides by temples and palatial dwellings, it must have been the perfection of architectural beauty. Between the temple and the arch was the market-place, or central square of the city, and on a column here there has been found the votive inscription of the leader of a commercial caravan. (Source: Picturesque Palestine, vol. 2, p. 194.)

There were, according to Wood, four rows of columns, between which ran the three avenues. Each column, consisting of three courses of stone admirably jointed, was fifty-seven feet high including the base and capital, and most of the columns have corbels or brackets projecting from them for supporting statues .  . . . This was evidently the monumental avenue of this Athens of the East, and the Palmyrenes here erected statues to their distinguished men, the inscriptions below giving the name of the individual. From one of the inscriptions it is clear that the chronological era in use in Palmyra was that of the Seleucidæ, 312 B.C. (Source: Picturesque Palestine, vol. 2, p. 195.) 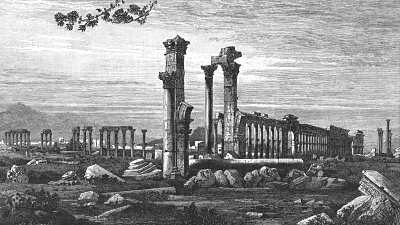 The colonnade is not built in a straight line, but curves slightly in the middle. This must have given it a peculiar effect when seen from a distance, or when observed by the crowds who thronged its avenues in the palmy days of the Queen of the East. At the curve or bend in the middle stand four square piers or bases, supposed to have been surmounted by colossal statues, or to have formed the foundations for a vaulted tetrapylon, standing as they do at the intersection of another colonnade running at right-angles with it. On the south side are rows of columns, which may have been connected with a forum. To the west of Dûr ’Allah, in the main colonnade, is a column bearing on its top another smaller column. Other smaller colonnades lead off in various directions to the numerous temples and other buildings that occupy the space around the grand colonnade. This is supposed to have formed a purely ornamental part of the town, the promenade or boulevard of this Palm City of the Desert. (Source: Picturesque Palestine, vol. 2, p. 195.)

The Triumphal Gateway, with three arches, the central arch being thirty-four feet high, is adorned with an excess of sculptured decoration, more Oriental than Grecian in its profuseness . . . . In the amount of minute detail, it reminds one of the temples of Northern India. The keystone of this central arch has subsided about a foot, and threatens to fall. The wonder in these ancient ruins is, not that so much has fallen, but that anything remains . . . . It seems difficult to realise, in this painful solitude, this voiceless ruin, where only a few Arab peasants mope drearily about, eking out a scanty subsistence from their little gardens and their flocks, that here once ebbed and flowed the surging tide of human activity, that these streets were thronged with merchants, civilians, Roman soldiers, Persian carpet dealers, Indian traders, and Greeks, Syrians, Bedawîn Arabs, and Egyptians, who made this city the mart of the East, the highway of the nations, and the centre of business life. (Source: Picturesque Palestine, vol. 2, pp. 194-95.)