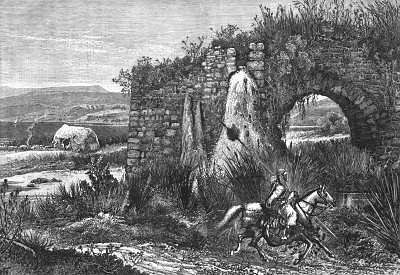 The Sea of Galilee from Et Tabighah, the Supposed Site of Bethsaida

About twenty minutes beyond this point there is another copious fountain called 'Ain et Tâbighah . . . . There are here a few ruins, and around the fountain itself is a strong octagon wall, designed to raise the water to a higher level, so that it might be carried over the small adjacent plain, and by means of the trench in the cliff at Khân Minyeh to the plain of Gennesaret as well . . . for 'Ain et Tîn lies so near the edge of the lake that the north end of the plain could not have been irrigated by it. The top of this reservoir is at present fifty one feet above the lake. In neither of these two fountains is the water very cool, and that in 'Ain et Tâbighah is besides slightly brackish. (Source: Picturesque Palestine, vol. 2, p. 84.) 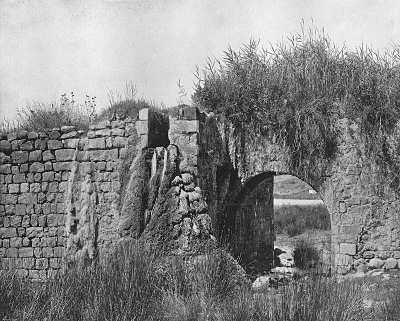 Source: Earthly Footsteps of the Man of Galilee, p. 188.

Some eminent scholars regard this as the site of Bethsaida, the home of Philip, Andrew, and Peter (John i. 44). It is called a "city," and hence must have been a place of some importance. Against this the absence of extensive ruins cannot be urged as an argument, when we consider the practice that has been carried on for ages of removing building materials from one place to another. Scholars are now nearly unanimous in the opinion that there were two Bethsaidas, an eastern and a western. About the one on the east of the Jordan there can be no dispute, for the site of the residence and burial-place of Herod Philip is well known. The name Bethsaida is said to mean House of Fish, but it can just as properly mean House or Place of Hunting. In the Hebrew it is invariably used in the latter sense. (Source: Picturesque Palestine, vol. 2, p. 84.)

Source: Earthly Footsteps of the Man of Galilee, p. 215.

In this picture we look toward the north and directly away from the Sea of Galilee. One of our muleteers stands in a perfect wilderness of flowers. The view was taken on the 9th of May, 1894, at ten o'clock a.m. . . . ; no sweeter day could be imagined than the one on which we stood in the presence of this traditional ruin, where possibly stood one of the cities where our Lord performed so many of His works. The same kind of weeds and thistles are found at Bethsaida (Tabighah) as are found at Capernaum or Tell Hum. Both places are nearly on a level. The woe of extinction pronounced upon Capernaum, Chorazin and Bethsaida has been literally fulfilled, as the "stones of emptiness" that mark the sites of those ancient cities bear witness. They live only as their names are enshrined in the Gospels with the name of Him who taught in their streets, healed their sick, and did many mighty works. (Source: Earthly Footsteps of the Man of Galilee, p. 215.) 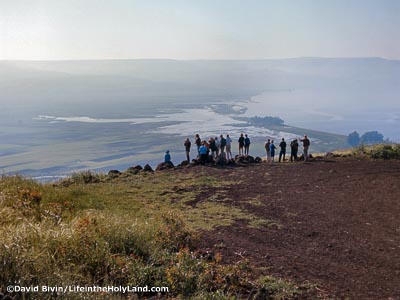 The Plain of Bethsaida was flooded at the time of this photo. The plain has long been susceptible to flooding, as the coast there is soft and silty. The area with trees on the shoreline center is Tell el-Araj, where Mendel Nun and others believe that Bethsaida was located (and not at et-Tell).

See Capernaum, Sea of Galilee, Tiberias, or Fishing and Fishermen