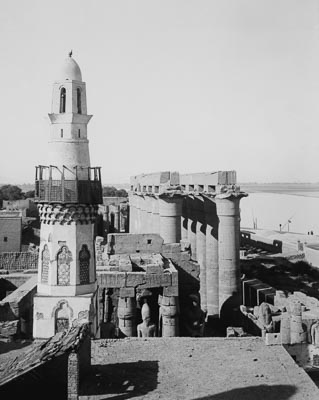 When we come to apply these generalisations [about Egyptian temples] to the immense assemblage of buildings known as Luxor and Karnak, we shall find some difficulty in identifying the various parts of the temple. At Luxor this difficulty is enhanced by the fact that the temple is half buried in a village, mud huts are huddled together within the vistas of columns, cocks crow and cattle are stalled in the sanctuary, while the picturesque black and white decoration of a simple mosque stands out against the sky not far from the beautiful obelisk of red granite whose fellow has been carried away to the Place de la Concorde at Paris. It is not easy at first sight to realise that the hospitable abode of Mustafa Agha, the British vice-consul . . . is actually built among the enormous columns of the grand colonnade which connected the first peristyle hall of Rameses II. with the temple of Amenoph III.; that the French consulate is built over the most sacred parts of this temple; and that the whole line of buildings that fringe the bank are interwoven into the ruins of one of the most splendid monuments of Egypt. (Source: Picturesque Palestine, vol. 4, pp. 207-8.) 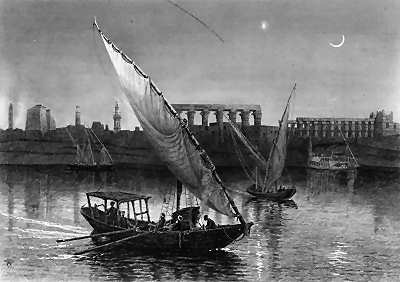 Part of the chief pylon of this double temple is seen in the [previous picture], with the remaining obelisk and one of the colossi, buried almost up to his shoulders. A column of the great peristyle court of Rameses II. is seen beyond, and some of the mud hovels which (together with the mosque shown [in the picture below], and in the steel engraving [shown here]) encumber the building. Behind this court is the anomalous colonnade, peristyle court, and sanctuary and surrounding chambers of the original structure built by Amenoph III., as may be seen in the steel engraving, where the great colonnade is above the large sail of the boat in the foreground, and the peristyle hall of Amenoph III. over the dahabîyeh which is moored to the bank, while to the left is seen the minaret of the mosque which stands upon the peristyle court of Rameses II., and still further the pylon and the widowed obelisk which also appear in the [previous picture]. (Source: Picturesque Palestine, vol. 4, p. 208.) 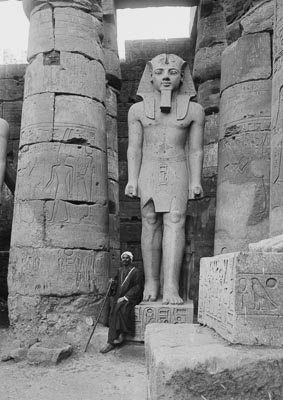 The temple of Luxor is the work of only two monarchs, Amenoph III. and Rameses II., and is therefore comparatively simple. When the mud huts are cleared away, an excellent work which M. Maspero is now attempting, the whole plan will appear coherent and complete. The curious bend in the axis of the temple, however, and the unexplained colonnade, will still form subjects for speculation, while the wall-pictures at present hidden by the village may be expected to furnish a mass of important historical material. (Source: Picturesque Palestine, vol. 4, p. 208.)