Jerusalem is entirely surrounded by a massive wall built by Sultan Suleiman in A.D. 1542. It is provided with numerous flanking towers, and protected on the north by a ditch partly cut in the rock. The form of the city is that of an irregular quadrangle, and the total extent of the walls is about two and a half miles. There are ten gates in the walls, five of which are open and five closed. Of the former, the Jaffa Gate is on the west, the Damascus Gate on the north, St. Stephen's Gate on the east, and the Zion and Dung Gates on the south; of the latter, the Gate of Flowers or of Herod is on the north, the Golden Gate on the east, and the Single, Double, and Triple Gates on the south. (Source: Picturesque Palestine, vol. 1, p. 6.)

Street inside Jaffa Gate with Bazaar 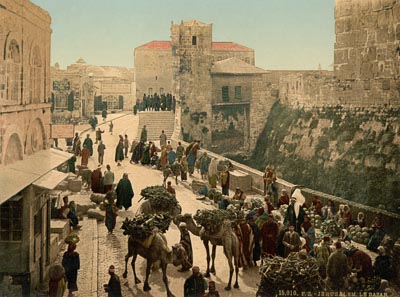 The Jaffa Gate, or Gate of Hebron (Bab el Khalil), is the principal entrance to the city, and its immediate neighbourhood is generally enlivened by a throng of passers-by, and by the groups of muleteers, packers, and idlers who spend a large portion of their time lounging about the cafes without the gate. . .  . A favourite site for a bivouac is the open space just within the Jaffa Gate; but pilgrims and wayfarers who select this spot must move at a very early hour in the morning, to make way for the peasants who come from the neighbouring villages with daily supplies of fruit, vegetables, and poultry for Jerusalem. This open space probably represents the "marketplace" mentioned by Josephus as being situated on the western hill, prior to the capture of the city by the Romans; and here the wholesale fruit and vegetable market is now held every day soon after sunrise . . . . In an hour or two the market people disperse, and only a few retail sellers of fruit or of rude pottery remain. The illustration . . . gives an excellent idea of this place as it appears during the midday hours. (Source: Picturesque Palestine, vol. 1, p. 7, 32, 34.) 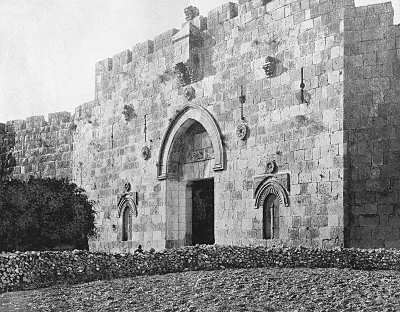 Source: Earthly Footsteps of the Man of Galilee, p. 159.

To the southwest of the Mosque of Omar, a short distance beyond the Armenian Monastery and the Church of St. James, is the Zion Gate, or the Gate of the Prophet David, which was built in the walls when they were reconstructed by Suliman, or Soliman, between 1539 and 1542, A. D. We have here a very beautiful picture of the Zion Gate. It was the first picture secured by our artist upon reaching Jerusalem, April 24, 1894. We are now looking toward the north. Coming through this gate we pass to the Tomb of David, and near here found many beggars, victims to that terrible disease, the leprosy. The gate has a massive door, with two wings mounted with iron. From the top of the battlements one can see the Moab hills beyond the River Jordan. The Zion Gate is perfectly plain, and has apparently no importance except to afford an outlet to that part of Mount Zion. (Source: Earthly Footsteps of the Man of Galilee, p. 159.) 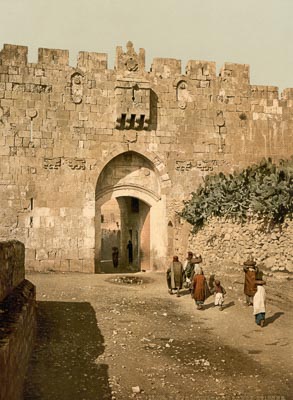 In the eastern wall there is but one open gate. Some call it St. Stephen's Gate, from a fifteenth century tradition that the first Christian martyr was stoned a few yards outside it, close to the path leading down to Gethsemane. Others called it the Gate of our Lady Mary, and there is a large reservoir not far distant bearing the name of the Virgin. All the roads from Olivet, Bethany, and Jericho meet here, and from this spot we commence our walk. It is a plain Saracenic portal, with pointed arch above and a depressed one beneath. On each side of the upper arch are rudely sculptured lions, as may be seen on the accompanying engraving. (Source: Jerusalem, Bethany, and Bethlehem, p. 26.)

At BiblePlaces, see Gates of the Old City